Global Industry Analysts have recently announced the publication of their comprehensive global outlook on the nanotechnology market. Following on from last year’s global report on the Nanocomposites market, which forecast the industry to be worth 1.3 billion pounds by the year 2015, the latest report recognises how the nanotechnology market has managed to weather the storm of the economic downturn without erosion of value. Demand from the defence and pharma industries have helped to insulate the market from the worst of the recession and government support across the globe has been a primary source of market activity. 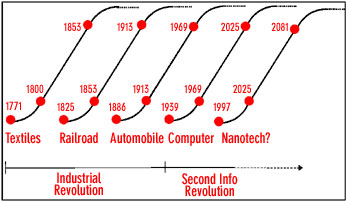 How soon will the graphene revolution begin? How soon is now.

The graphene revolution has the potential to mimic the revolutions of previous decades and centuries; and if it does speculation in emerging companies will be considered prescient and well judged investments. One prominent economist, Norm Poire, who has studied the pattern of market innovations argues that major innovations drive the economy in an almost reglar pattern; 28 years of nascent emerging, followed by 56 years of rapid growth, and then 28 years of deceleration until 112 years after conception the innovation grows in line with population. If graphene follows this pattern it will be repeating the market trajectories of the textiles industry, the railways, automobiles and computers.

With graphene having been discovered in 2004 we are still in the earliest phase of the cycle, much is yet to come and the real price increases are still many years away if this model is accurate. However, as shown later, the stock price chart for CVD Equipment suggests that even the early stages of growth of an investment in graphene promises a fair degree of excitement, if not paroxysms of unexpurgated joy.