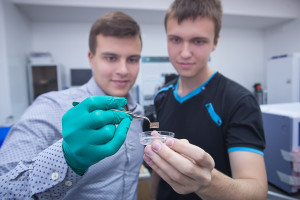 Longing to find a cure for cancer, HIV and other yet incurable diseases, researchers have already tried out hundreds of drugs, each requiring preclinical and clinical testing with live subjects. How many chemical agents more to try? Moving at such rate, will we find the cure during our lifetime?

One of the easiest ways to speed up the drug development process is to simply perform it outside of the living body (e.g., by watching the substances react with the smallest pieces of live tissue and thus quickly predicting the overall effect it will mak
e to the body when inside).  This approach will eventually provide more effective preclinical selection of drug candidates for the subsequent long-term and expensive clinical trial. This could get the humanity closer to finding the cures we’ve long been seeking for.

Researchers from the Laboratory of Nanooptics and Plasmonics, Moscow Institute of Physics and Technology – MIPT (Russia) have devised a novel type of graphene oxide (GO) based biosensor that could potentially significantly speed up the process of drug development. The outstanding properties of this carbon allotrope help to improve significantly the biosensing sensitivity, which in future may enable the development of new drugs and vaccines against many dangerous diseases including HIV, hepatitis and cancer. The research, led by Yury Stebunov, a scientist at the MIPT, was published in the ACS Applied Materials & Interfaces. The paper is titled “Highly sensitive and selective sensor chips with graphene-oxide linking layer”. Valentyn Volkov is the co-lead author, a visiting professor from the University of Southern Denmark. Other co-authors are Olga Aftenieva and Aleksey Arsenin. New GO based biosensor chips exploit the phenomenon of surface plasmon resonance (SPR).
Surface plasmons are electromagnetic waves propagating along a metal-dielectric interface (e.g., gold/air) and having the amplitudes exponentially decaying in the neighbor media. Adsorption of molecules from solution onto a sensing surface alters the refractive index of the medium near this surface and, therefore, changes the conditions of SPR. These sensors can detect biomolecule adsorption even at a few trillionth of a gram per millimeter square. Owing to the above-mentioned merits, SPR biosensing is an outstanding platform to boost technological progress in the areas of medicine and biotechnology. Nevertheless, the most distinctive feature of such sensors is an ability to “visualize” molecular interactions in real time.

“SPR biosensing is a valuable tool to investigate a wide range of biochemical reactions, estimate their chemical kinetics and other characteristics. All this can be efficiently used for new drug discovery and validation. Widespread introduction of this method into preclinical trials will completely change the pharmaceutical industry. With SPR sensors we just need to estimate the interaction between the drug and targets on the sensing surface,” Stebunov said.

Most commercial SPR sensor chips comprise a thin glass plate covered by gold layer with thiol or polymer layers on it. The biosensing sensitivity depends on the properties of chip surface. Higher binding capacity for biomolecules increases the signal levels and accuracy of analysis. The last several years, novel carbon materials like graphene have attracted much attention due to their large surface area, low-cost fabrication, and interaction with a wide range of biomolecules.

Stebunov and the team from the Laboratory of Nanooptics and Plasmonics at MIPT created and patented a novel type of SPR sensor chips with the linking layer, made of GO, a material with more attractive optical and chemical properties than pristine graphene. The GO “flakes” were deposited on the 35 nm gold layer. Thereafter a layer of streptavidin protein was developed on GO for selective immobilization of biomolecules.

Scientists conducted a series of experiments with the GO chip, the commercially available chip with carboxymethylated dextran (CMD) layer and the chip covered by monolayer graphene. Experiments showed that the proposed GO chip has three times higher sensitivity than the CMD chip and 3.7 times than the chip with pristine graphene. These results mean, that the new chip needs much less molecules for detecting a compound and can be used for analysis of chemical reactions with small drug molecules. An important advantage of the new GO based sensor chips is their simplicity and low-cost fabrication compared to sensor chips that are already commercially available.

“Our invention will help in drug development against viral and cancer diseases. We are expecting that pharmaceutical industry will express a strong demand for our technology”, Stebunov said.

“The sensor can also find applications in food quality control, toxin screening, the sensor can significantly shorten a time for a clinical diagnostic,” researcher added.
However, the developed chip should go through a clinical trial for medical applications.

The study was supported by the Ministry of Education and Science of the Russian Federation and Russian Academic Excellence Project 5-100. The authors thank Boris Khattatov and Slava Petropavlovskikh from the BiOptix, Inc (Boulder, USA) for expert technical assistance and helpful discussions with the experiment.